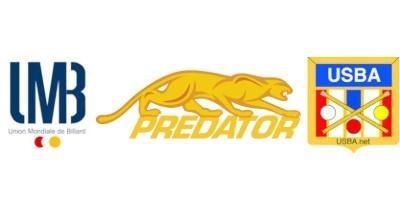 The UMB has drawn the groups for the March 27 to April 2 World Cup in Las Vegas.  The groups, player list, and timetable can be found on the UMB website (https://www.umb-carom.org) under the Active Events tab.  Twenty-two (22) USBA players will participate in the World Cup.
The Las Vegas World Cup, sponsored by Predator, will be held at the Rio All-Suite Hotel & Casino. Per the UMB rules, Predator has selected Pedro Piedrabuena and Hugo Patiño as its wildcard entries into the 1/16 main tournament round at the World Cup. Piedrabuena won his 10th national championship crown in December 2021, and Patiño is a four-time USA title holder.
Joining Piedrabuena and Patiño in the World Cup are twenty (20) other USBA enthusiasts. Ten (10) USBA players have been placed into the groups per the UMB rules. Tae Kyu Lee and Miguel Torres, based on their world rankings, were placed into the PQ round. Lee won the 2020 US national tournament and finished second in the 2021 nationals. Torres has won the US national tournament twice. Five (5) USBA players, based on their finish in the 2021 US National tournament, have been placed into the PPQ round: Young Kyu Lee, Edward Gomez, John Park, Kang Lee, and Eric Kwon. Raymond Groot, who was selected by the USBA, has also been placed in the PPQ round. Mazin Shooni and Frank Torres, each a former national champion chosen by the USBA to participate in the World Cup, have been placed in the PPPQ round.
Ten (10) spots remain to be chosen for USBA entries into the World Cup. Eight (8) will be chosen on March 25 in a qualifier, and the other two (2) will be determined on March 26 in a second qualifier. The following USBA players are entered into the March 25 qualifier.

These thirty-two (32) players will be drawn into 8 groups of 4, with the winner of each group qualifying. On March 26, there will be a single elimination bracket to determine the final two (2) qualifiers. The players will play in a single-elimination bracket, with the two (2) finalists earning spots in the World Cup. SOME SPOTS ARE STILL AVAILABLE FOR THE MARCH 26 QUALIFIER. REGISTER ON THE USBA WEBSITE.